Last January, we solicited heads of bobwhite and scaled quail in order to assess them for the prevalence of eyeworms.  With only a short time left in the 2017-18 quail season, hunters submitted 923 heads for our inspection.  Joe Crafton, a Director of RPQRF, donated $19,000 in order to hire a technician for 6 months to head up the necropsies.  We were lucky to find and hire Miss Jennifer Newkirk, a recent graduate of the University of Florida, to join our team and head up the (unsavory) task of dissecting 963 quail heads (plus 141 whole carcasses for cecal worms); she did a great job!

Each cooperator received a customized report detailing the results of their respective submissions.  Those results are confidential to the landowner/manager.  Here we publish the results from our Research Ranch’s birds as an example of these reports.  Our ultimate goal is to produce a “heat map” showing prevalence and intensity of eyeworm infections.  We hope to repeat this type of surveillance effort during the 2018-19 season, but recognize samples will be more difficult to acquire (due to low quail abundance).  We are currently negotiating with TPWD to enlist their biologists in an effort to increase sample size, and geographic coverage—stay tuned for submission details.   The grant we received from Park Cities Quail includes funds to hire a technician for this effort in 2019.

Thanks to Kevin Skow with the Natural Resources Institute for producing the “heat map” included here.

Last February you submitted heads, carcasses, or both to the Rolling Plains Quail Research Foundation for examination of eyeworms and cecal worms.  We thank you for your participation.  The following report provides the results from this study.  We report results by county, not ranch, and some counties may have included birds from more than one ranch.  If you have questions about your respective results, please contact Dr. Dale Rollins at 325-650-0311 or drollins@quailresearch.org.

Quail in the Rolling Plains of Texas have declined over the past few years. Although quail in this ecoregion exhibit “boom and bust” cycles following La Nina – El Nino weather patterns, we don’t understand the interactions of some other possibly important factors, e.g., disease.  One possible factor for the “busts” may involve the increased infection rate of certain endoparasites, namely eyeworms (Oxyspirura petrowi) and cecal worms (Aulonocephalus pennula).

This past season, many hunters were concerned about the prevalence of eyeworms in harvested birds.  To determine how widespread the problem was, the Rolling Plains Quail Research Foundation solicited quail heads and whole birds from hunters in five states, with the vast majority coming from the Rolling Plains of Texas.  We received a total of 826 heads and 141 complete carcasses (making a total of 963 heads) of quail taken during late-January and February.  We received birds from 5 states, but the vast majority came from west Texas.

Eyeworms are typically located in the Harderian glands and lacrimal ducts (tear duct) behind the eye, although they can sometimes be seen on the surface of the eye as well. They have been documented to cause corneal scarring, inflammation of the lacrimal duct, and thus may impair a quail’s vision. The lifecycle of the worms is poorly understood, but we know they enter the bird when the quail consumes infected arthropods (insects) which serve as an intermediate host. The ceca of birds are important for digestion, as well as a variety of other life processes. The cecal worms (at high numbers) can cause problems by simply “blocking” the lumen of the ceca.

We examined 826 heads for eyeworms and did complete necropsies on 141 whole birds for cecal worms (collectively 963 heads). The majority of heads were from bobwhites (n=832) with fewer scaled quail heads received (n=131). We received samples from Texas (mostly the Rolling Plains), as well as a few from Kansas, New Mexico, North Carolina, and Oklahoma. Some samples were omitted from analysis because they were received in poor condition (e.g., shot through one or both eyes.)

Eyeworms:  Three techniques were used to assess the presence of eyeworms. First was the “Crafton technique”, named after Joe Crafton, which could be used by hunters in the field. This involved using your thumbs to palpate the eye and count any worms that became visible. Second, we used the “Newsom technique” (suggested by Jess Newsom) which involved a dental pick to more thoroughly examine under the nictitating membrane (the third eyelid of a quail). This exposes any worms that were under the membrane. The last step was to do a complete necropsy, removing the eyes and examining the tissues behind them. This is where the majority of the worms would typically be found. The number of worms found in each method in each eye was recorded, as well as the total number.

Cecal worms:  The ceca are found at the junction of the small and large intestines; typically they are about as long as your little finger (somewhat larger in scaled quail).  We excised the ceca, then cut them open to reveal the “digesta”(i.e. digested food) therein.  The digesta was then placed on a sieve and washed to expose worms.  The worms were then counted and the total recorded. Nearly all ceca were from Texas birds and all cecal worms were assumed to be A. pennula

Figure 1. Accuracy of two techniques (Crafton and Newsom) for detecting the presence of eyeworms compared to complete necropsy of the eyes and associated tissues. “None externally” means no worms were detected in infected birds after conducting the Crafton and Newsom Techniques.

Your sample from RPQRR is marked with a red arrow so you can see how your quail compared to other submissions.

Note the sample size (n) from several counties is small, so keep this in mind when evaluating the results. While we do not currently know what the “action threshold” (no. of worms present to justify treatment) is, we think at this time a “heavy” infection is anything >30 eyeworms/bird.

Cecal Worms:  The following chart indicates the average infection by county (Fig. 3).  According to our records 5 whole carcasses were received from RPQRR.  While we do not currently know what the “action threshold” (no. of cecal worms present to justify treatment) is, we think at this time a “heavy” infection is anything above 300 cecal worms/bird.

External (field) evaluations provide somewhat reliable, but conservative estimates of eyeworm infections. Infections were not similar among sites; counties in the lower Rolling Plains tended to have the highest infections.  Samples received from Borden Co. and westward showed minimal infections of eyeworms, but this may have been a result of more scaled quail in the samples. Cecal worms followed a similar pattern, but sample sizes were too low in most counties to make inferences.

We hope to repeat this study over the next few years. The more data we can collect, the better we can assess the presence, distribution, and effects of eyeworms and cecal worms on quail.

Acknowledgments:  J. Newkirk conducted the necropsies for this project; we thank her for her diligence and quality control.  L. Lacoste catalogued the specimens, and B. Kubecka and B. Ruzicka provided editorial and statistical support. Funding for this project was provided by J. Crafton, a Director for RPQRF.  We thank all hunters who donated quail for this study. 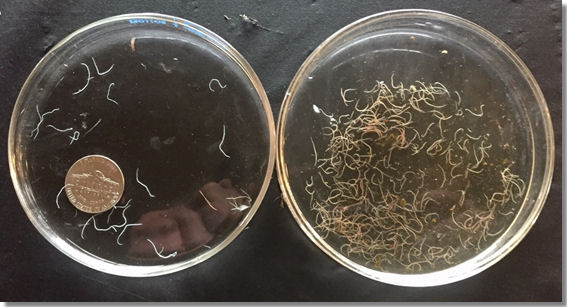 Average number of eyeworms recorded for bobwhites received from all locations.  Sample size (n) is shown in parentheses of the respective site. Total sample size was 832.  Use caution when interpreting results where n<10.

Average number of eyeworms recorded for scaled quail received from all locations. Sample size (n) is shown in parentheses of the respective site.  Total sample size was 133.  Use caution when interpreting results where n<10.