Renowned Outdoor Writer -Tom Davis says it best:  “No one I know better personifies upland hunting as an art form than Rick Snipes. Nor has anyone I know raised the bar as high. As he himself observes, “Our role as bird hunters is to bear witness to our dogs’ artistry, and confirm their genius with our guns.” In that single eloquent sentence, Rick Snipes encapsulates everything I’ve been trying to say in 35 years of writing about gun dogs and bird hunting.

I’ve heard Rick described as “the consummate quail hunter,” but while that’s certainly true it only tells part of the story. To me he’s the Renaissance Man of the wingshooting world. In the field there is no skill he does not possess, but he’s widely read, too, deeply knowledgeable on a variety of subjects, thoughtful, analytical, insightful, and also howlingly funny. He’s at ease in any company, at home in any environment. He has that rare gift, regardless of the setting or situation, for making everyone around him better.

And as he has shown in his leadership role as President of the Rolling Plains Quail Research Foundation—Rick is passionately, even ferociously, committed to the cause of quail conservation. While recognizing that the quality of the habitat is paramount, Rick has tirelessly advocated the creative “outside the box” approaches to solving the problem of quail decline.

The ongoing research into the effect of parasites on bobwhite quail populations, an effort funded by Park Cities Quail and the RPQRF, is a noteworthy example of the kind of groundbreaking work he feels is absolutely necessary if this grand bird, and this great sport, are to survive.” – Tom Davis 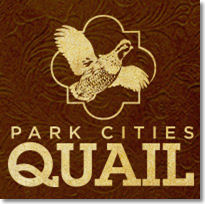 Finally, congratulations to Park cities Quail, which last month shattered their previous fundraising record by netting $1.7 million.  Any wonder why they refer to this event as “Conservation’s Greatest Night?”  FMI, see http://parkcitiesquail.org/2018-dinner-live-auction/.

Park Cities Quail is our largest annual benefactor.  To date they have provided almost $4 million in support of our efforts.  I praise them often as “the wind under our research wings.”  Go ahead and mark your calendars for the first Thursday in March for next year’s annual gala.